When I was an undergraduate, I had the opportunity to ‘gentle’ a year old mustang from the Bureau of Land Management. My little colt (whom I named John Wayne) had recently been taken from the wild (as part of the BLM’s mustang population management) and had never been touched by a human before.

With a partner, we taught Wayne how to trust. By the time he was adopted, he was a human-friendly little guy who knew how to ground drive, accepted being led/backed with a halter, was cool with getting his hooves picked, standing for the farrier/vet, lie down on command and he wasn’t scared of tarps, bags, umbrellas, alpacas, or other typically ‘scary’ stuff.

Although many people used to use ‘flooding’ to desensitize horses to objects (i.e. using a tarp to rub a horse down that is scared of tarps, until the horse no longer reacts to the tarp) and some probably still do, we were lucky to approach our mustang training in a less confrontational way.

Anytime you are working with an animal that is very scared/unsure of their environment, it is likely that you will end up needing to overwhelm them or flood them at some time. Most of the time I prefer to go at the animals own pace, but it is true that you can’t have learning without stress. Not all stress is bad stress, but flooding often leads to animals that shutdown.

What do you do when you already have an animal that is shut down?

The answer is: It depends.

With Jonah, I have been flooding him with physical contact (for short periods of time, followed by rewarding him with allowing him to choose to walk away). It seems counter-intuitive to many people to reward him with space, but you have to reward animals with something they find positive. Many people will reward a dog by hugging them or petting them on the head, but these are actions most dogs don’t appreciate and exuberant human affection can actually end up punishing dogs, especially shy dogs like Jonah. So he gets rewarded with what he wants: space.

This contact session consisted of scooping him up, holding him on my lap, him falling asleep, and then him relocating to the foot of the recliner (still touching me) when he was released with an ‘okay.’ 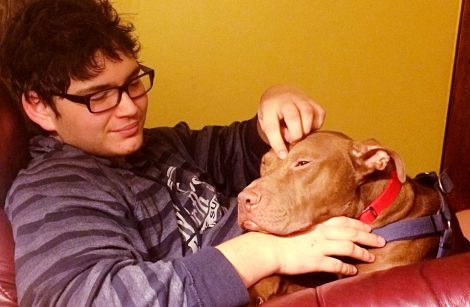 Also, he falls asleep when you pet him between the eyes.