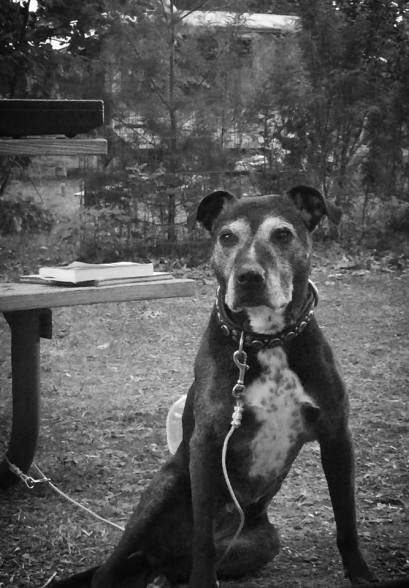 In this case, our leader is Georgie. When I got home from work yesterday, she leapt off of the couch to greet me, all happy wags. She was so sweet and happy to see me that it took me about a half of a second to figure out what was going on–you see Georgie is currently being treated for separation anxiety and cannot safely be left out of the kennel when we are not home (she gets into all sorts of things she’s not supposed to, including dangerous stuff like chewing up the cat door into wooden splinters).  Somehow (and I don’t quite know how yet) she escaped from her kennel and made herself comfortable. Which is actually kind of cute, seeing as she didn’t hurt herself.

You probably remember that we just got a new foster dog, Penny. We have been introducing Penny slowly, just because she tucks her tail a little when the dogs get close. She is really tolerant and dog friendly, but we don’t’ know her well yet and we try to do our foster dogs the courtesy of not immediately forcing them to interact with other animals when their whole world is upside down. You can see how things have been going, below:

Essentially really well. Frankie and Georgie are interested in Penny but willing to give her space. Penny is (honestly) not too interested in them but doesn’t seem to mind if they aren’t crowding her. We had planned to keep on this slower introduction path for maybe one more day, until we had seen Penny’s body language loosen up a little bit (we still haven’t seen a tail wag out of her).  Slow integration was the plan, but we didn’t follow the precautions that we typically do (i.e. I got lazy and didn’t follow my own instructions).

To be left home alone, they need a minimum of two solid barriers between them. I usually do three. At least one of the barriers needs to completely block vision. I typically recommend giving each dog their own room and kenneling them inside that room. For the dog I don’t know as well, I always kennel them. My own personal dog I may just keep in a separate bedroom.

Make sure the kennel is secure. If you have a reactive dog, often times they are a little on the anxious side. If they aren’t kennel trained, they may really test the kennel and potentially escape it. I know of a dog that broke out of a kennel, chewed through a solid wood door and killed another dog that was loose in the house. A secure kennel is a MUST. I always zip-tie the crap out of mine just in case.

We left Penny out in the living room (on a bed with her food bowl) and Georgie, for the first time ever, escaped her kennel in the kitchen. And had full access of the downstairs. Which includes the living room, where Penny was.

And everything was fine. As  to be expected. But–just another example of how important multiple barriers and secure kennels are with dogs that are NOT geriatric dog-friendly dogs. With different dogs in the same situation, this could have been a terrible interaction. We let our guard down and Georgie reminded us that dogs are resourceful and it is important to try to anticipate and plan for all of the things that could happen.

Since Georgie made her opinion known, we added Frankie into the mix on a walk and called them integrated.  We still monitor the food bowls and toys (we are lucky that neither Penny nor Georgie resource guard, since the food bowl was out), but overall things are back to normal at our house: relaxing on the couch and hanging out in the backyard.