Jonah has continued to blow us out of the water. At home, he is really coming into his own as the hilarious puppy we all knew he could be. He gets more frequent bouts of the zoomies (we call him the “tornado potato”) where he will run around the house and yard but more than that, he has started actively playing with us–tug, chase, flirt-pole, and fetch. He is up to about 75% on his “bring the ball back and drop it for you” skill–and up to about 95% as long as you are standing in the right place in the yard!

When I look at him now, I’m reminded of Pinnochio. Not because his nose keeps getting longer, but because I can’t help but hear the puppet’s high pitched voice in my head saying “I’m a real boy!” Jonah has completely come out of his shell and in our home and yard, you wouldn’t have any inkling of how shut down he used to be.

Outside of our home (on walks, at adoption events) he is still working on becoming comfortable but doing a very, very good job. On walks, he (understandably) gets concerned when there are very loud noises (semi-trucks getting too close and motorcycles revving as they pass by) or we are in high-traffic areas (lots of car and foot traffic). 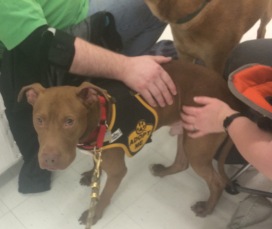 Jonah went to another adoption event this weekend and was more comfortable than he had been before, although still clearly overwhelmed. Initially, I was holding him on my lap because it was too scary. Once he settled in and we moved out of the throng, he steadily became less overwhelmed. He was able to meet new dogs and people and sought out small amounts of attention from them. He sat on a young (8-10 year old) boy’s lap and was so good and gentle during the entire event, even though there was so much going on.

One thing that really creeps Jonah out at events is people he doesn’t know being directly in his face. This usually manifests itself only when the photographers are trying to get a good picture of him, because I try to steer everyone to pet him on his shoulders or behind his ears.  The photographers take excellent pictures and they are so patient with the animals, but Jonah desperately does not want his head shot taken and it is evident all over his body language in the picture below. It’s actually a good learning tool. Can you see the signs of stress? You can compare his expression to the pictures above if necessary.

After his busy morning at the Pet Haven adoption event, Jonah passed out for several hours. He is a champion napper. 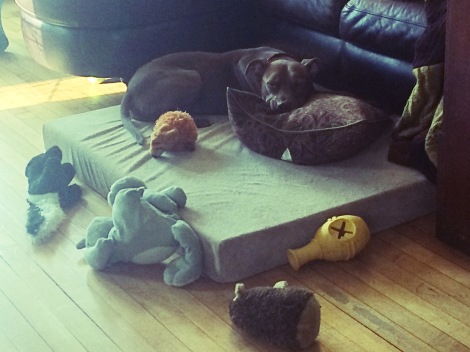 But don’t worry, once he woke up he was ready to play again, and kept searching for more of his favorite stuffies in his toy box. 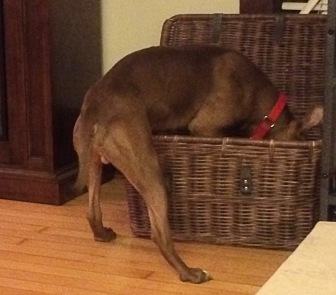