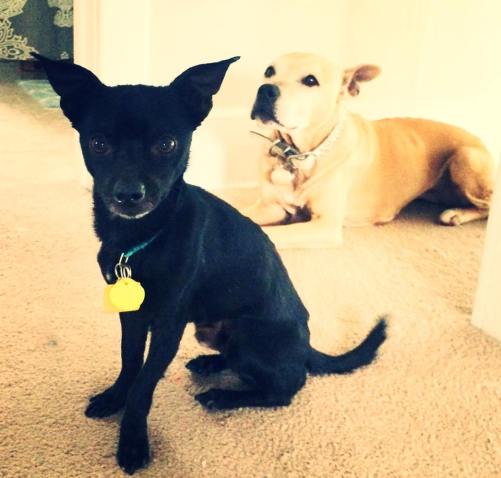 We have a temp foster staying with for a week and a half while his foster is out of town. He is a young Chihuahua mix named Vader. (and is currently up for adoption with Pet Haven). 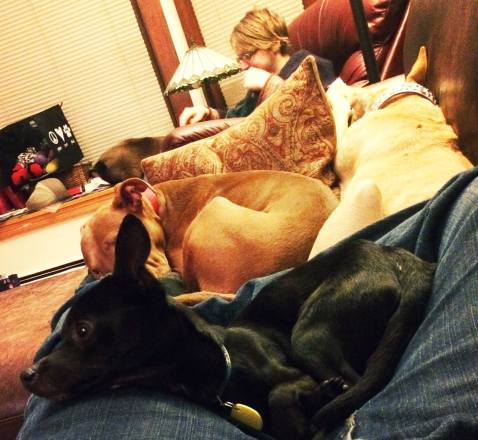 We did ‘slow intros’ with him, but they were very different from our general imperfect dog introductions. That’s because we have a good handle on how Frankie and Jonah will react and Vader is VERY good (and patient) with other dogs. Essentially, we introduced them one-on-one. When Vader was dropped off, I put Frankie and the cats upstairs (we weren’t sure if Vader was good with cats or not). Then I kenneled Jonah. Vader had run of the downstairs for a while and then I switched Jonah and Vader, so Vader was in the kennel. I could have just had them meet on leash but I was home alone and always recommend introducing dogs when there are at least two people there. Plus, Jonah is SO enthusiastic and rude and Vader is so small, I wanted to make sure he didn’t accidentally crush him. 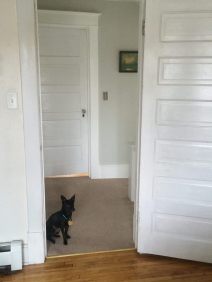 Then I let Frankie down and let the big dogs have run of the house for a while. After taking them outside, I tethered Frankie and Jonah. Since they were interested in Vader but not obsessed with him, I pulled him out of the kennel and held him on my lap. That’s essentially how the rest of the night went, with a sniff here and there. 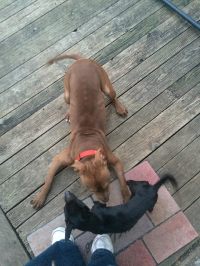 The next day, we did short intros one-on-one with the bigger dog leashed. Jonah was all play-bows and trying to incite play. Vader was really tolerant and was mildly interested in play, but Jonah was coming on a little strong. Throughout the day we had Jonah either tethered or on a drag line and someone was always with Vader. Not because we are worried that Jonah will snap at him, but because Vader is so dainty and small (8lbs).Jonah keeps trying to play rough with him like he plays with Frankie and that just won’t work. By the following day, most of the novelty of a tiny new dog in the house had worn off for Jonah, although he still REALLY wants to play.

Jonah, Frankie, and Vader all coexist in the house together just fine, but we make sure if all three dogs are out loose (not on tie-downs or with drag lines) that two people are there, just for safety and because raucous play behavior can turn predatory and Jonah doesn’t have a real relationship with Vader yet. 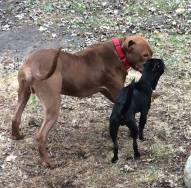 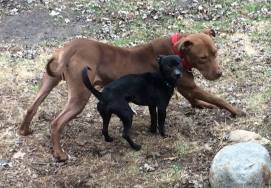 Vader and Frankie were instant companions (they both are ambivalent about other dogs) and are quite cute together (grooming each other).

If you are looking for a friendly, quiet, cuddly little dog that walks well on leash and doesn’t have ‘small dog syndrome,’ think about adopting Vader! 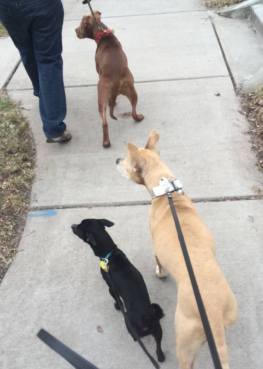