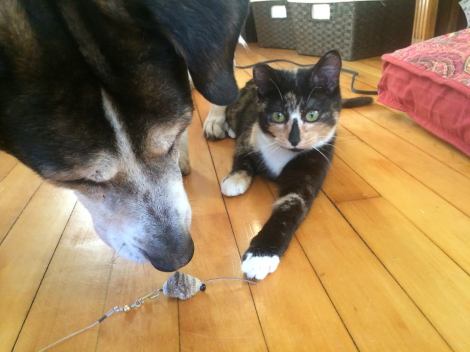 Cat owners are often at a disadvantage when looking to adopt or foster dogs. There often isn’t a lot of information on whether or not a homeless dog is good with cats.That can be for a variety of reasons, but usually it boils down to: dogs are difficult to “cat test”; shelters won’t allow it; the foster home doesn’t have cats; or the dog’s response to cats was difficult to gauge.

I can say all of those things because although I LOVE CATS if you had to put me in one camp or the other I would be considered a dog person. And I have put my cat’s needs second a few times. Some of the stressful things Bali and Burma have had to deal with:

I admit that in the heat of the moment (“This dog will die without a foster”) we have decided to foster cat-aggressive dogs. In these instances, we have complete separation and the cats never have to see the dog (and visa versa). We do this to decrease stress on our cats and so the dog isn’t constantly looking for cats. We are lucky enough to have an upstairs and a downstairs. When we first moved in, we installed a door to the upstairs specifically for the purpose of being able to keep the cats safe from our foster dog at the time, Matt, who was very cat-aggressive.

Whenever we are thinking about fostering or adopting now, the first thing we ask and think about is “has the dog lived with cats before” and “how does the dog interact with cats.” The open-ended question is really important and will show you what the person knows about the dog’s interactions. It’s important to note that although a dog has successfully lived with cats before it doesn’t mean he is cat-safe. He could be one of those dogs that is great for “dog-savvy” cats. I have to admit, I hate seeing “good with dog-savvy cats” in an adoption write-up because it can mean a lot of different things to different people.

“Dog-savvy” can mean any of the following:

It’s more helpful to describe the actual behaviors. Consider instead:

It can be really difficult to tell if a dog is good with cats or not, especially if they are not in a home-setting. We recommend being vigilant and having a drag line on any dog whose disposition toward cats is unknown. Cats are small and dogs (especially large ones) can seriously injure them without even trying.

What we prefer in an adoption write-up about cat interactions:

We wouldn’t adopt a dog that wants to be buddies with cats–because that is NOT what our cats want. Bali and Burma would prefer to be left alone. Too much interaction (even if the dog views it as a positive interaction) is stressful for them. Our cats are special enough that they will develop upper respiratory infections from the stress on their immune systems or begin self-mutilating out of anxiety.  When fostering or adopting, pay attention to your cat(s) and think about what they would prefer in a companion.